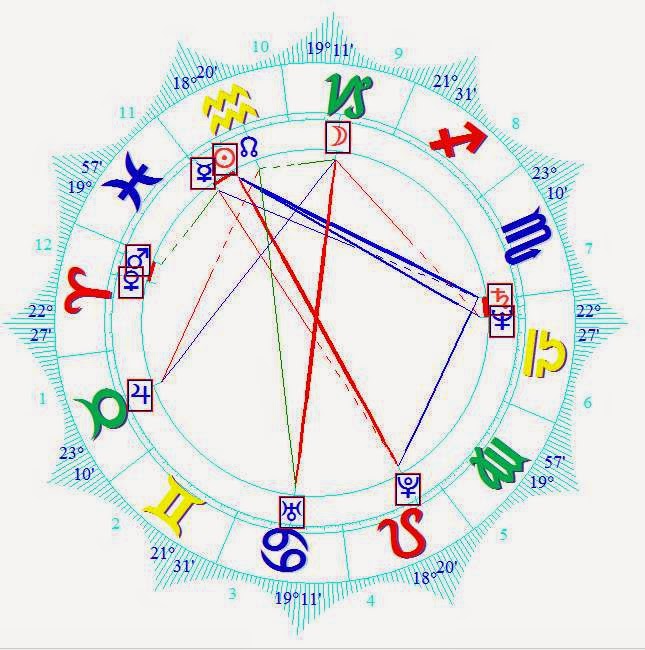 The word ‘astrology’ is popularly understood as a means of the predictive science of futurology. In fact, futurology comprises of a diversity of approaches through occult means such as palmistry, numerology, horoscopy, horary astrology, omenology, intuition, pre-diction through tea-leaves, face-reading etc. All of these means of futurology form, in a broader sense, part and parcel of what is in layman’s language called as astrology. But precisely astrology is a predictive science dealing with the correlation between terrestrial events and celestial phenomena. In the light of precise meaning of the sublime science of astrology, a purview of some general simplistic about astrology is presented here as under: 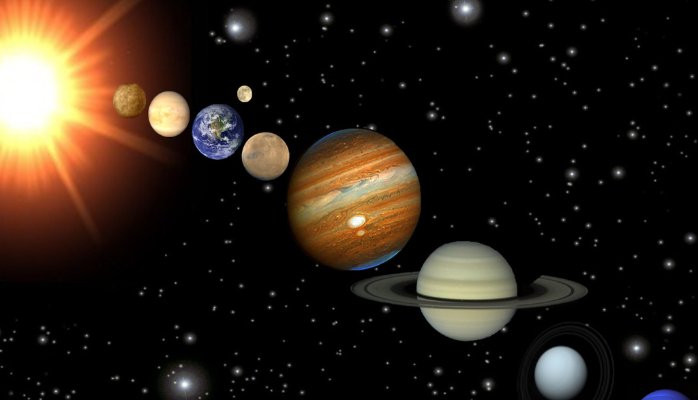 Stars are fixed in the heavens. Planets visibly move among the stars. Technically celestial bodies which revolve around the Sun are known as planets, and satellites are those celestial bodies which revolve around any planet. In predictive astrology, even the Moon is considered as a planet. Although the earth is a planet in the solar system, yet because of geocentric observation, the Sun is treated as a planet. Rahu (Dragon’s head) and Ketu (Dragon’s tail) theoretically the two points of intersection between ecliptic and lunar orbit among the stars, separated through 180° from each other, are also assigned with the status of a planet each for the purposes of predictive astrology. In this light, these are nine planets in Hindu predictive astrology which are mentioned as under:

Besides, Herschel, Neptune and Pluto are three extra Saturnine planets. Herschel is also called as Uranus and Pluto as Venkatesh. In ancient Indian predictive astrology, an adequate mention is not found about these extra-Saturnine planets probably because they had not been discovered in those olden times. Even in modern Indian astrology, they are not given any significant place probably because they are very distantly posited in the heavens and therefore they can have little influence on terrestrial events, of course. It is worth-mentioning here that there exist several planetoids in the space in between Mars and Jupiter. Each planetoid is so small that it can have little effect on terrestrial events. In jaina canonical texts, there is  a mention of 88 planets including planetoids. And the aforesaid nine planets have been termed as teraka grahas (star planets).

Ecliptic or the solar orbit among the stars has been divided in twelve parts of 30° each. Each part is called a sign known after a particular name. ‘The twelve signs or Rashis are mentioned as under:

The first and foremost in the series is Aries sign. The zero point of Aries, according to Raivat School, coincides with the star Zeta Piscium of Pisces sign. According to Chitra School, the zero point of Aries is situated at 180° from the star Alpha Virginis or Chitra nakshatra (asterism). For purposes of predictive astrology, some astrologers like the famous Dr. B.V.Ra man and Krishnamoorti have, of their own, fixed the first point of Aries on the ecliptic respectively. They follow their own respective Schools, of thought for all astrological purposes which do not seem to have any astronomical foundation at all because they are the least concerned with any observable star in the heavens.

Ecliptic or the solar orbit has been divided into 27 equal parts of 13 each. They are known after the names of 27 nakshatras mentioned as below:

In fact it is revealed from the history of ancient lndain astron-omy that ecliptic as well as lunar zodiac were graduated in time degrees of days of one period of revolution of the Moon among the stars. Roughly the Moon completes one revolution among the stars in 27 days. But actually a period of revolution of the Moon consists of 27+21/67 days. That is why Abhijit, the 28th nakshatra, was conceived. Last quarter of Uttarasadha and first-fifteenth part of shravana. make Abhijit nakshatra. For purposes of name ceremony and election astrology, Abhijit nakshatra is also made use of.

Every nakshatra is further sub-divided into four equal parts or quarters as they may be called as well. Zero point of Aries is also the zero point of Ashvini: These days Ashvini heads the list of nakshatra whereas Aries heads the list of signs. Every sign consists of two and a quarter of nakshatras. For example, Aries comprises of Ashvini, Bharani and first quarter of krittika nakshatra.

There are 27 yoga’s :mentioned, as under:

Half-tithi is known as karana (half lunar day). Every tithi consists of two karanas. Some karanas are movable and some others a_ _ immovable. Movable karanas are seven in number, viz.

Vishti karana is also known as Bhadra. In election astrology, Bhadra is not considered to be an auspicious time.

Every immovable karana commences only once a month at a fixed time of half-tithi. Movable karanas commence more than once in every lunar month. However karanas are permanently associated with half-tithis as shown in the following table:

Day means ‘day and night’ i.e. ahoratra. Traditionally only daylight is called a day. There are seven days in all, viz. Monday, Tuesday, Wednesday, Thursday, Friday, Saturday and Sunday. According to Indian tradition a day measures from sunrise to sunrise, whereas according to English calendar the day’s length is the time from midnight to midnight i.e. 12.00 pm. to 12.00 pm.

In Vedic times the day was called after the name of the nakshatra on that day. Thus there was a cycle of 27 days. Then the days were counted by the ordinal numbers from one to fifteen such as the first day, second day etc. The fifteen days corresponded to the lunar days of the bright or the dark half of a lunar month. Thereafter the cycle of seven days came into vogue. The seven days correspond to seven planets. There are twenty-four hours in an ahoratra or a day. Each hour is governed by a planet. The planet governing the first hour after sunrise becomes the lord of the day and the day is called after that planet. To learn about the lord of the hour, all the seven planet are considered in the following order:

The earth has three motions. One, annual motion that causes change in seasons. Two, diurnal motion that causes the cycle of day and night Third, oscillatory motion that causes a cyclic change in the position of North Pole on earth resulting into the shifting of terrestrial equator. ,Consequently there occurs a change in the position of Vernal Equinox also. It has been observed that Vernal Equinox retrogrades at the rate of 50″.2731 a year. In this way Vernal Equinox retrogrades through 1° in 72 years approximately. According to Indian or Hindu astrology, Vernal Equinox is fixed in the heavens. Thus the difference between the positions of movable and fixed Vernal Equinoxes goes on increasing. The magnitude of precession of equinoxes with respect to the fixed Vernal Equinox is known as .what is traditionally called as Ayanamsa. There is a 26000 years cycle of precession of equinoxes. In this light there will be a complete change in seasons after 13000 years. As a result there will be summer in December and winter in June. The reason behind this change of seasons is that the length of the tropical year i.e. the time of the solar transit from Vernal Equinox to Vernal Equinox, is the time taken by the Sun to traverse (360°-50″.2731) along the ecliptic whereas a sidereal year is the time required by the Sun to traverse 360° along the solar orbit. Consequently Vaishakhi, solar ingress into Aries according to the Hindu calendar, shifts one date of. English calendar every 72 years. Thus Vaishakhi which commences on 14th April these days will commence on 14th October after about 13000 years.

There are some orthodox scholars who believe that ayanamsa oscillates with an amplitude of 28°. This view is totally refuted in the light of present advancements in the study of heavens.

Indian months or sidereal months are twelve in number, viz. Chaitra, Vaishakha, Jyestha, Asadha, Shravana, Bhadrapada, Ashvina, Karttika, Margashirsa, Pausa, Magha and Phalguna. The day when the Sun crosses over the fixed Vernal Equinox and thus enters the first point of Aries of the Hindu zodiac, is celebrated as Vaishakhi and the month Vaishakha commences. The month Jyestha begins when the sun enters first point of Taurus. In this way the time taken by the Sun to transit a sign or one-twelfth of the zodiacal circle makes a sidereal month, viz.

The earth has an elliptical orbit about the Sun. Because our observation is geocentric, so the Sun appears to move about the earth in an elliptical orbit. The solar motion on its elliptical orbit is not uniform. So the Sun takes different lengths of time for transiting different signs of the zodiac. So the lengths of all the sidereal months are also not equal. A month is made up of 32 days whereas another of 30 days only. The perigee when the Sun is nearest to the earth and the apogee when the Sun is farthest from the earth are also not fixed among the stars. Therefore after quite a long span of time the lengths of the sidereal months will also undergo some change. These days Asadha has 32 days. It will reduce to 31 days and then to 30 days whereas the adjacent month will correspondingly gain in length.

According to Hindu astrology, the lunar month measures from new-moon-day to new-moon-day (amavasyanta) or from full-moon-day to full-moon-day (purnimanta). According to Moslem calendar, a new lunar month begins at the sight of the new moon. Like sidereal months, lunar months are also called as Chaitra, Vaishakha etc. They are also twelve in number. Some festivals are associated with the lunar motion. For example, birth day of Guru Gobind Singh Ji is celebrated on seventh lunar day of the bright half of the lunar month Pausa. Recently this festival was celebrated twice in one year of the English calendar.

Sometimes at the instance of an intercalary lunar month, there occurs a difference of opinion among the scholars regarding the determination of some festivals. This is why sometimes a festival is celebrated twice in an year, e.g. two Deepavalis, two Dussehras etc.

-1
Scientific Base of Jyotisha
Astrology, Remedies or Jyotish as Science
wpDiscuz